I’m brought back to my time in North Dakota, holding space with the indigenous protectors of sacred waters. Another long drive through miles of agriculture to a point of interest in the middle of nowhere to meet as a clan of rainbow people and stand up against injustice.

This time we are calling for the protection of families and individual children. The corporations are not digging up death and employing the black snake to transport it beneath our feet under sacred waterways. No, they’ve decided to put death out in the open, this time utilizing the form of a tent city to detain hundreds of children in 100° desert temperatures.

A local representative comments on the audacity of this current administration using taxpayer dollars to build these concentration camps, doing so seemingly overnight. He goes further expressing how adequate aid still hasn’t been provided for our citizenry in Puerto Rico recovering from Hurricane Maria, and yet they build these “detention centers” so quickly. Saying we must look in the mirror as a nation. This presidency is conscious of the acts of genocide it is committing. It is continuing an American tradition.

“Open borders,” a sign reads.
“Abolish ICE.”
“Yes, we care,” in white painted on the back of a green silk coat.

“Si, se puede,” she chants. The audience goes wild and moves closer to get a better view. Bobby Kennedy’s daughter moves to the side after introducing the esteemed labor activist, Dolores Huerta.

Huerta encourages everyone in the crowd not to give up. She says we must keep marching. That this administration has already backed down after rising public pressure. We must keep the pressure on. She recants slogans from her days as a young labor activist saying a democracy fails without a strong middle class. We must empower the workers of the middle class. Goes on to say we must be marching every day. Says everything but “seize the means of production”. But she says that too, only in her own way.

The woman who coined the catchphrase, “Yes, we can” has no doubt that the people can unite and thwart their oppressors.

I am struck by how there is a difference in cadence between the politicians’ way of talking and the activists ability to rally. Politicians with their lines well-rehearsed and a controlled pattern of when and how to gauge a rise from the audience.

On the other hand, activists move straight from the heart. Their words are not always smooth and well-versed, but they move the audience deeper into feeling what’s right from the blood to the breath. Mothers and teachers talking about the issues from personal experience. And the more seasoned the activist, the more their heartspeak is a spell cast that wraps the audience up in a swirl of synergy between heart, mind, and spirit. 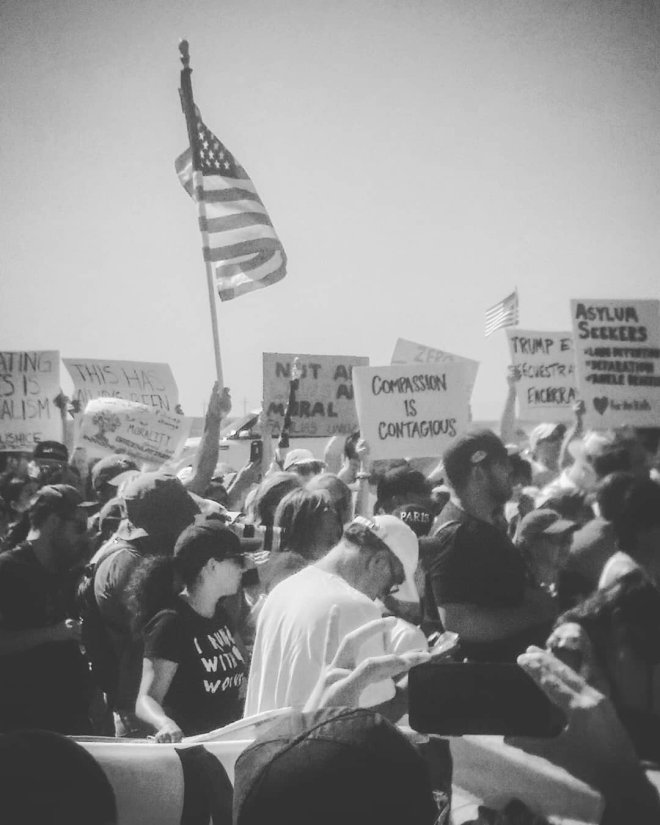 A few thousand feet away, behind several rows of chainlink fence, you can see the pointed tops of several canvas tents baking in the hot sun.

Speakers from the Border Network for Human Rights remind the audience that these children are refugees running from struggles that America’s foreign policy has created. They speak in terms of compassion pointing out that many of these families are not victims. They are strong people who stood up to the gangs and corrupt politicians of their homelands and as a result were pushed to flee.

They remind us that not all of these children are just from the American continents. ICE and border patrol have been going after dreamers from all different backgrounds. The policies that go after the most at risk are based in white supremacist ideology.

In this last group of activists, who have worked so closely with the refugees that are detained, I see how we have yet to hear from the actual refugees themselves in the mainstream media. In the coverage of this debacle, these very real people have been dehumanized to numbers and mere statistics.

All of their stories are yet to be told. We must use our own hearts to understand what they must be going through. To understand what it must be like to be separated from your child, and told by an ICE agent you’ll never see them again.

All of it feels unreal and because it is so real, we must continue to fight. We must unify under one banner. Many speakers during the rally emphasized voting in November. But it goes beyond that. It goes beyond calling your elected representatives. It goes beyond marching in the streets and planning direct actions. It’ll take a radical shift in every aspect of American life to curb the monstrosity we have empowered. But, Si, se puede! We are alive at this time to do exactly that.

Only apathy will hold us back.

Hey, New Orleans friends! Check it out! In addition to the installation I curated this past weekend at Currents New Media Festival, on Saturday some of my printed works were featured on the other end of the country.

“Libraries”, an exhibition curated by my alma mater Little Berlin, is up right now at The Front in New Orleans, LA. The exhibition will be on view at the gallery until July 9th.

Thank you to Will Owen and Cayla Lockwood for thinking of me and including me in the collection of zines and printed works from the Little Berlin zine library.

If you’re in New Orleans, go give the exhibition a look and check out some of my writing from the past couple of years.

“Libraries” at The Front in NOLA

Today, I’m feeling really honored to have been asked to be a part of the international cast of artists who are participating in Currents New Media Festival (@currentsnewmedia) this year. Opening weekend was a wild blur of disjointed surreality with so many vulnerabilities exposed and manifestations transposed.

When we set out to create the ManifeSTATION Station, there was no way of knowing how many powerful moments our energies would conjure. From a stranger asking us to write a dream to celebrate 15 years since she had a stroke as a kid, to the family sharing their story about how they almost missed their son’s birthday because of car trouble and a cancelled flight, to all the new friends that repeatedly visited us throughout the weekend to decompress from the festivities happening on the main stage.

There were tears shared. There were hearts opened wide. The unicorn and clown animas brightened the moments that felt lonely. Everyone thought we were on psychedelics, but we were probably the soberest people there, just one foot in the dream, doing the Fool’s leap to other dimensions.

On our last night we stayed late in the tent reading all of the manifestations that had been written throughout the weekend. Reading writings from the Hopes and Dreams side, I felt a tug at my heart, and started weeping. There’s so much suffering in the world. All of the visitors. It felt like the lotus tent behind us had spread a wide net to round up all of the fellow freaks and outsiders.

The space presented itself as a space to recover from the outside perils. Something about the vacant lot we assembled it on, held this vortex of energy. Only the right people even saw us, much less entered. Every moment shared was a return to personal peace.

Every click of the typewriter adding to a soundbath elixir. The mantras projected animating inner consciousness. An expansion of installations assembled in the main gallery.

And in that main gallery, themes of climate change, identity, and expanding community continued to reflect what we set out to accomplish. It felt like everything was a deep conversation on the human experience. I appreciate so much the folks we shared the stage with. 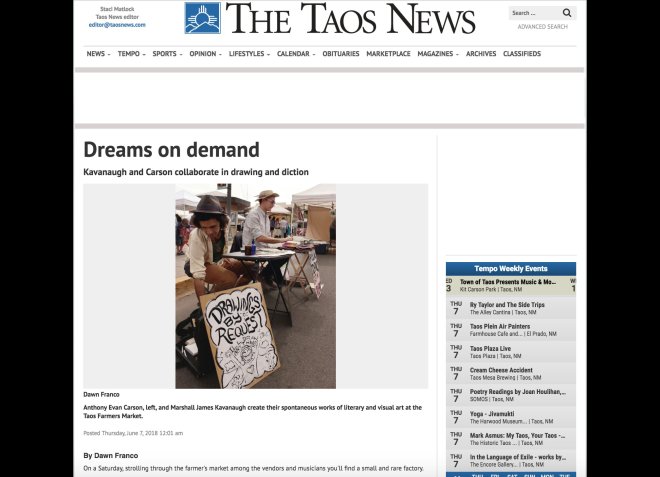 Excited to see myself and Anthony Evan Carson featured in the Taos News this week for our #poetryondemand and #drawingsbyrequest around the area over the last few years!

Come check us out at Currents New Media Festival this weekend where we’ll be manifesting #dreamsbyrequest all night long.

Special thank you to Dawn Franco for the incredible write up documenting all the collaborations and projects we’ve been pulling together recently.

You can read the full article here: https://taosnews.com/stories/dreams-on-demand,48761?