COLUMBUS AND OTHER CANNIBALS

It seems fitting that there are hundreds of Wetikos armed with baseball bats, hammers, and other instruments of recreational violence hanging around the Christopher Columbus statue in South Philadelphia. Wetiko, an Algonquin term that quite literally means cannibal, was recoined by the AIM activist and poet Jack D. Forbes to describe the mentality that Western settlers brought to Turtle Island when they stole it and then began consuming everything around them.

It seems fitting that these self-described South Philly Italians are showing up to defend this statue of their patron saint to imperialism and thus becoming inhabited by the spirit of violence he propagated during his time alive. This is a person who put the Taino people in bondage, chopped off the men’s limbs, fed women and children to wild dogs, and committed other atrocities that are well documented by his peers at the time. He is a Wetiko on a pedestal that still holds a powerful place in history that continues to shape our society today. Check out Jack D. Forbes’ book, Columbus And Other Cannibals to better understand these terms and ideas.

The reason this is especially dangerous is that a Wetiko is contagious. It is no joke when people compare racism to a pandemic. The Wetiko is the very first virus of our minds. Their rage fuels an echo of rage in those they oppress. You cannot fight a Wetiko. Not head on, at least. They will cough on you and you will get sick. To fight them, is to succumb to the spirit of violence that they propagate. You cannot stand by and peacefully let them conquer you either. They will take whatever you allow them to take.

The approach to reclaim your own body and a collective autonomy on your surroundings, must be a balanced and grounded one. It must seek to subvert the pain and violence that the Wetiko wishes to exert on those around it.

There is an easy antidote to cure yourself. John Trudell, another indigenous poet and songwriter of our time, suggests finding a peace of land and becoming a steward to its existence. The hippy generation suggests making love. Both are active ingredients to separating you from the control of the Wetiko.

But how do you spread this grounded peace to cure the Wetiko?

It takes a level head. It takes a big heart. Perhaps an energetic shield and something carried to ground the activist’s spirit. A handful of seeds? Maybe a flower. There are words that can be spoken that will spread like wild fire. A proper cleanse. So that the land within him will be chased by Fireweed, Fire Poppies, and Whispering Bells.

Kill the Man, Save The Wilderness Within.

Pull down Columbus and plant a tree instead.

Columbus and Other Cannibals…

This Saturday, May 30th at 12pm, I’ll be performing a virtual reading of my favorite parts of Walt Whitman’s Leaves Of Grass for his 201st birthday, as part of Laurel Hill Cemetery’s #ArtistryAboveGroundMarket. I’ll also read from Joy Harjo’s An American Sunrise, a collection of poetry by our current poet laureate that offers an indigenous perspective on the American pastoral. This reading will be followed by a demo where I lead the audience through my writing process for spontaneous typewritten poetry.

Click here to RSVP and attend this virtual event on Zoom

As part of the virtual market, I’ll also be typing poetry on demand based on requests given in real time. Follow the link and sign up for a time to get a poem on any topic and support the other vendors at one of the coolest cemeteries in Philadelphia.

I think as a contemporary writer, it’s important to pay homage to the literary giants who drafted the modern canon before us. I think it’s also the task of every poet out there now to find ways to celebrate the writers who redraft and update this canon for the present moment. I’m excited to share these two narratives in celebration of one of Philly’s literary voices on his 201st trip around the sun. Hope to see you there!
.
.
📸 by Alexa Lewis

For about two months now, Philadelphia has joined the world in quarantine. Out of the lockdown a whole world of collaboration has sprung. No distance is too much an obstacle for the power of the imagination.

It’s crazy to think I’ve been co-organizing in the #magicmanifestations livestreams for this long. In that time, I’ve had the privilege to share screen time with so many incredible writers, singers, dancers, illustrators, and fellow dreamers. Together we #manifestbyrequest an unending amount of dreams to be performed live for the entertainment of audiences based all around the world. Viewers give us a topic and we bring it to life in front of their eyes!

Did you miss the show? Well, you’re in luck! I decided it was high time to finally make a little montage of all the wild magic that we’ve created together.

Featured in the video are some of the folks based all around the country that I’ve created with. Go give them a follow! In order of appearance, they are: @drawingsbyrequest, @quentinthepoet, @movedtomove, @marianmclaughlin, @vianney.paul, @juliadayedot, and @lindoyes

The weather is getting nice out and it’s likely I’ll be stepping back from going live as often, in order to get out and enjoy it, but keep an eye out for more Magic Manifestations to come. In the meantime, you can continue to support the dream by requesting a poem or becoming a monthly patron.

I could use a few more monthly patrons to be sustainable through this pandemic. If you’ve enjoyed a poem in the past, please consider signing up for a monthly subscription. $25 and you’ll receive a personalized poem typed with clean hands once a month sealed in an envelope with other goodies.

There are other tiers available. Even $1 a month really helps, and I’ll send you a Postcard Haiku to say thank you. I really appreciate all of the support that I’ve already received!

Become a patron and support a dream poet!

Winter Blues won’t slow me down and the novel continues to be written, but let’s take a break from that to post about something I’m really excited about.

This coming week, Police In The Wilderness will be released. Police In The Wilderness is a collection of plays by Cameron Christopher Stuart that I worked closely with the author over several late fall and early winter months to publish. The book features two versions of the same play written and revisited along with various dramatic stagings by Saints of an Unnamed Country over a ten year period, creating an experience to fully absorb the psychedelic audacity of this wild expose on the human wilderness. With themes of climate change, life in a dystopian police state, and mind-altering philosophical dialectics on the birth and death of poetic meaning, this collection could’ve chosen no better time to make its grand entrance into our collective consciousness.

Cameron and I worked together to make this release something special, complete with photos from previous performances, endnotes to give the reader some extended reading to explore, and illustrations by the virtuoso Stephanie Beattie.

Copies will be included with tickets to the live staging of Police In The Wilderness at Patch Works in Brooklyn, NY during its 5 show run from January 22-25, 2020 as part of The Exponential Festival.

Read an interview about the play here: http://bit.ly/2sn31mn
Link to get your tickets is here: https://policeinthewilderness.brownpapertickets.com/ 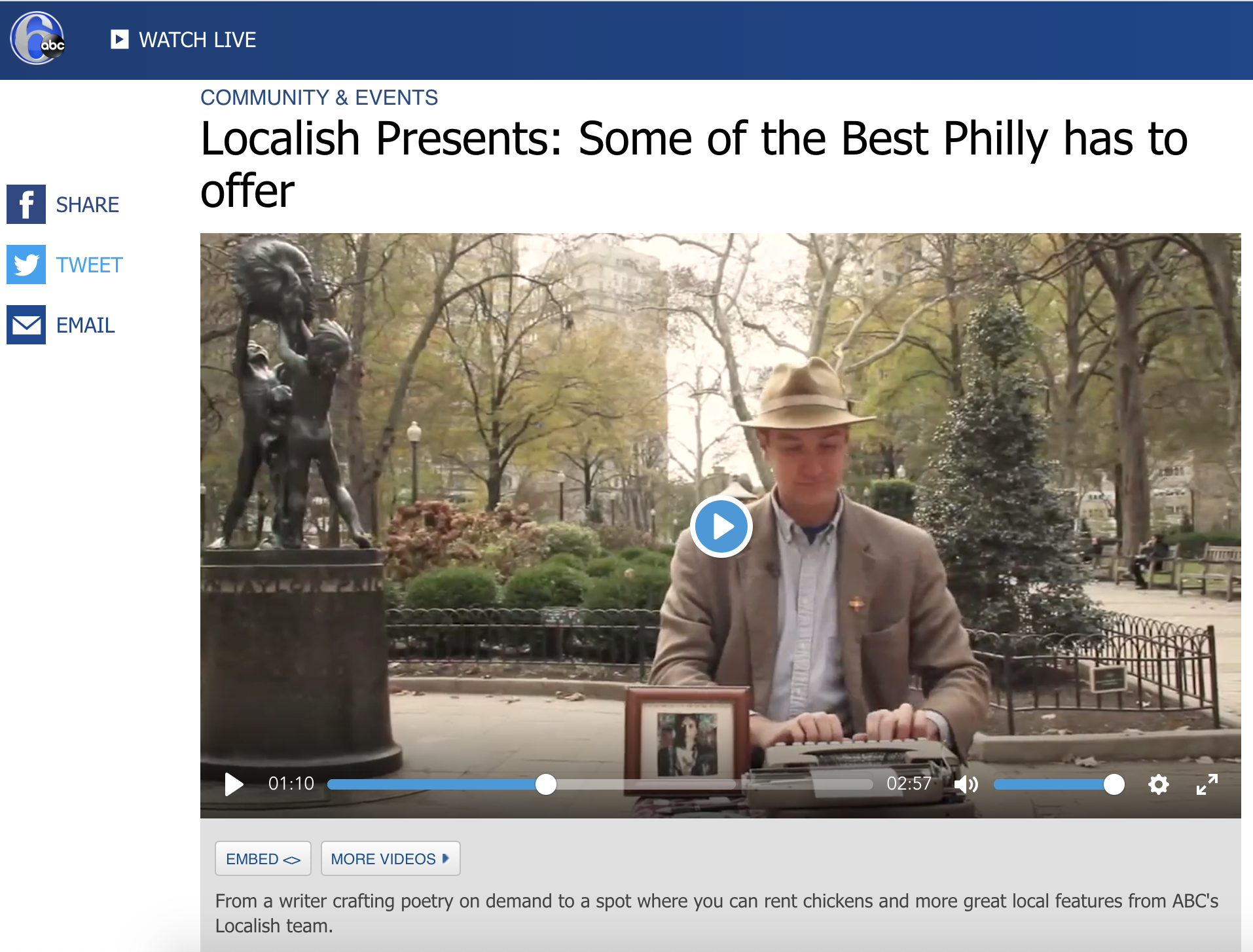 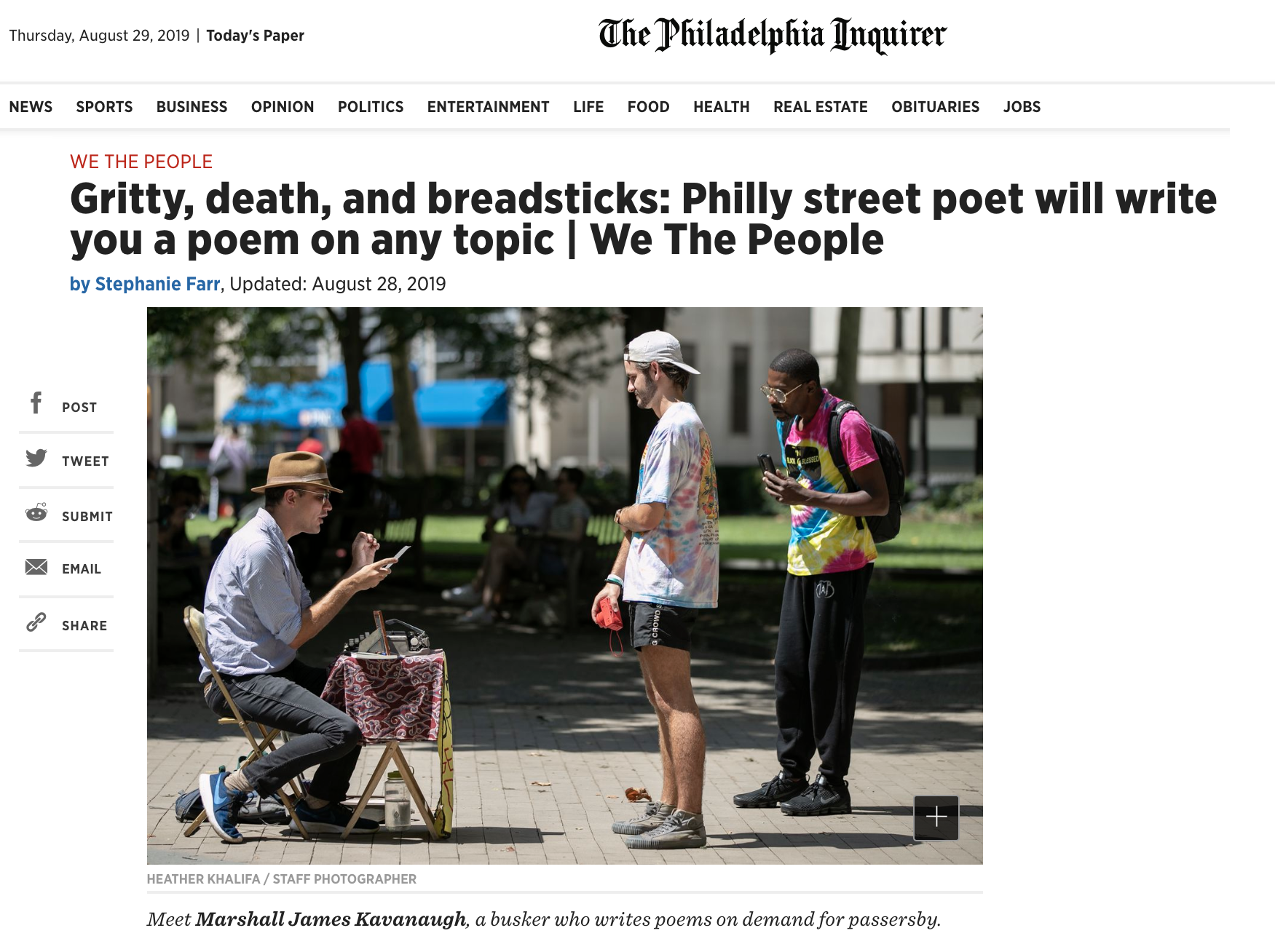 Dream Poet For Hire in the Philadelphia Inquirer

Join me next Monday, July 15th at The Bohemian Grove for Disrupt The Daydream. I’ll be sharing some spoken word along with performances by Samantha Riott, Mr. Truelove, OPTO S, KA, and Holy Hell.

LET US CALL OURSELVES ARTEMISIA VULGARIS

The difference between us and them is we spend too much time mourning our losses and not enough time celebrating what we still have.

Do the bankers or the developers or the fossil fuel execs worry about losing everything? No. They’ll work themselves bankrupt and this whole world into lack if there is a chance there is some sort of profit to be had. Shit, even when they are bankrupt they’ll work the system to bail them out. I mean, look at it this way, a man who lost $10 billion and has bankrupted more institutions than should even be possible in a single lifetime, is now our president. That is “them”.

We need to have that kind of fearlessness to protect what we still have. We need to develop that kind of fluidity to let go of what is already lost in order to save enough so that we have ground from which we can rebuild it. The radical left needs to become more agile. More able to take a blow and regroup with a new defense. We need to carry multiple flags, multiple hats, and at the same time refuse becoming too structured, too able to be cornered and had. Bought and sold. Our tears only more room for their profit.

We still have the Earth. We have her to lead us. Does the Earth mourn the loss of a single flower at the end of every summer? No. She puts all her intentions into the roots and accepts the cycle of winter, knowing the shadow is necessary before next year’s growth.

We must be more like the Earth. The Earth is the only true radical, and we are hers to hold. Our roots are still yet to be cut. Until they are, we must hold strong and be like the garden weed. Be like the mycelium. A network of roots springing up through out the ground, never to be dug up or struck down as long as the Earth still holds us.

We call them the Black Snake, but what is our antidote?

We must be less like gardeners and more like the actual roots of our garden. Let us call ourselves Bindweed. Or Morning Glory. Or Artemisia Vulgaris. Turn this whole land back into a swampy meadow.

LET US CALL OURSELVES ARTEMISIA VULGARIS
The Life and Works of Marshall James Kavanaugh
Create a free website or blog at WordPress.com.