This is just about the coolest gift imaginable! My sister commissioned the ever-amazing Marian McLaughlin to make a personalized crankie based on my cross-country road trips.

Subscribe to my Patreon to see the full video: https://bit.ly/PledgeToHaiku

What is a crankie, you may ask? It’s an old storytelling device where a long, illustrated scroll is hand-cranked through a viewing window while a story is told. @marianmclaughlin makes them on demand on any topic or idea. Send her a message if you’d like to commission a gift like this for someone you love. She’s open for requests and as you can see an extraordinary dream laborer. This storyboard features the likes of Parse Seco, and the unicorn Ma Ja Ka, as well as a snapshot of the Poets For Peace.

As far as the new book, it includes haikus like the ones featured in this clip. We’re a quarter of the way to funding a release party that’ll feature performances like this. Your pledge to my Patreon campaign means I’ll be able to pay performers and promote the new book.

For as little as $1 a month, you can read all the rough drafts and watch the accompanying animations. For $7 a month, I’ll mail you a signed copy of the book when it’s released in March 2021. All tiers of support have a chance to contribute to the behind the scenes of a book of poetry being born out of the dust of the road.

As part of The PASEO Festival 2018 in Taos, NM this year, I was invited to discuss my work as an installation artist and services as a Dream Poet For HIre at Pecha Kucha, Volume 28. I decided to take the opportunity to wax poetic on the archetype of The Poet and how they fit in with the larger world based on the things I’ve learned and experienced over the years while typing poetry on the street. Here is the video from that night. Enjoy!

Pecha Kucha Night Taos, Volume 28
Give the River a Voice at the MANIFESTATION STATION

Objective: Through community dialogue and art creation we seek to give the river and surrounding watershed a sovereign voice, both as a means of creative expression and eventually legal reasoning.

Manifestation Station: The Manifestation Station is a lotus tent acquired for water protection in 2016. Since then it has been utilized as a shared community space to release fears and trauma that hold us back so we can open up space, personally and collectively, for the manifestation of positive dreams to emerge through these challenging times of planetary changes.

For the Paseo Project outdoor arts festival on September 14-15, the Manifestation Station will be a collaborative installation in the park at the John Dunn Shops created to raise awareness about our local watershed and allow the community a meeting point to discuss the future of our watershed. The installation will involve a series of audio and visual projections based around the surrounding waterways. Sounds of the river will be amplified above the conversations this will create, while video of these same waterways will be screened inside the lotus tent and on surfaces surrounding the installation. Inside the tent there will be two typewriters connected to an infinite scroll. Upon the scroll, community members will be instructed to write out prayers for our watershed, in the form of hopes and dreams for the world they would like to cultivate and leave behind for future generations, and fears and doubts for the world that is currently being manifested by the industrialized culture we live in.

Conclusion: The goal of this art installation is to transform our understanding of community, and to encourage people to get involved in the safeguarding of our watershed through positive, co-creative actions based in reverence for life. Break-out groups will form that will take up this call and form the necessary values that will protect our collective future here locally. The first steps are to meet and greet each other at the “water hole,” ask important questions together, raise awareness and begin crafting positive solutions together.

a collaboration with Taos Water Protectors 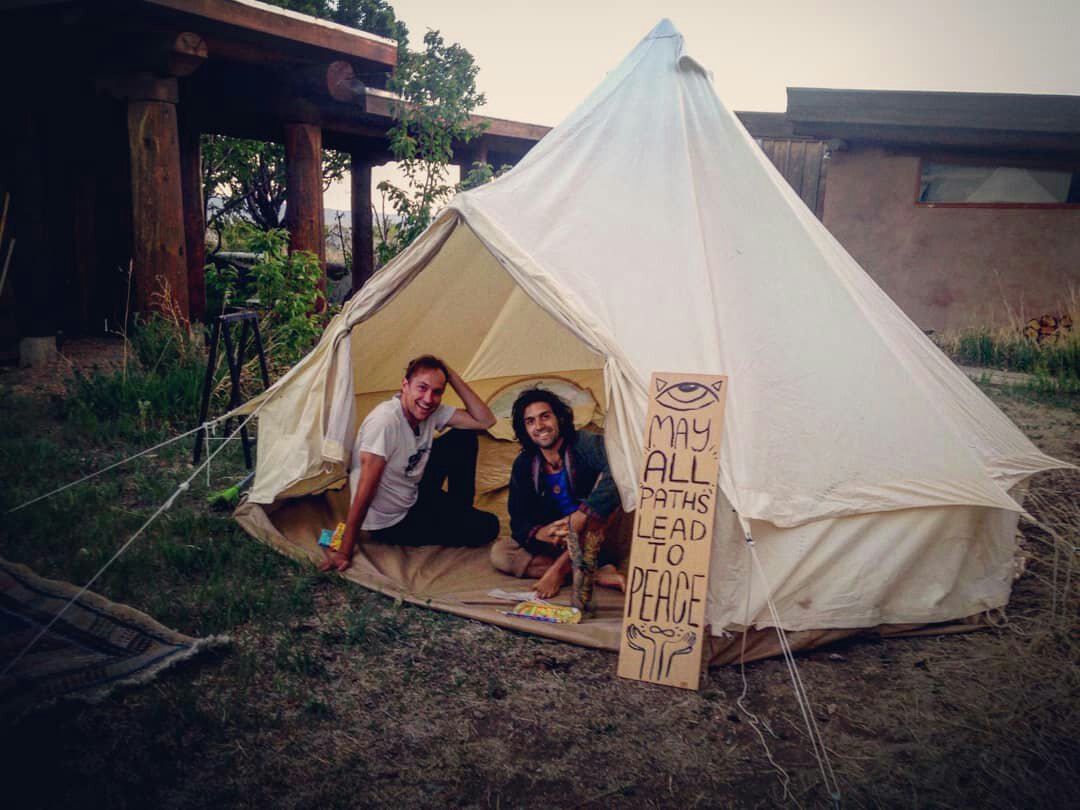 Step inside this lotus tent and add your manifestations to the air. There will be audio and visual projections to make all these manifestations come true. We’re talking about the simple things and the big things. The everything that is personal and the way things like the Earth call us home.

Outside the ManifeSTATION Station, Anthony and I will be offering #dreamsbyrequest in the form of drawings and typewritten poetry. Can’t wait to pull this wild experience together and share it with you all, come June!


I woke up Sunday morning and wondered if it had all been just a dream. The kind of dreaming where it is hard to distinguish the surreal from reality. A whirlwind of sound and experience. And every element falling into place exactly as it should be.

It only happens once every few years, but on Saturday night I separated from my dream body, the magical unicorn, Ma Ja Ka. It was the closing night of “A Poem Is Where The Heart Is…” and the mood seemed right for us to become two bodies in order to read some of the poetry everyone has written throughout National Poetry Month inside the gallery.

Thank you everyone for attending this grand dream exhibition! Thank you to everyone who played such a big role in creating it. So much beauty and community was shared. I’m still frolicking in the euphoria stirred in my heart. I thought I’d be relieved to have the month over, but honestly, my heart aches for more. Looking forward to everything that comes next in this wild life.

Closing Reception on Saturday, May 12th, 2018 at 7pm
At Parse Seco (487 State Road 150, Arroyo Seco, NM – next to Taos Cow)
April was Poetry Month and Parse Seco had quite the literary medley to keep your ears, eyes, and hearts entertained. On Saturday, May 12th the gallery opens its doors with an installation that showcases the diverse range of voices found in the Taos region. Through spoken word, music, movement, and film, audience members will find themselves connected to a community so elevated in its heart. Stop by for the closing reception for a last chance to add your voice to the exquisite corpse that has grown along the gallery walls throughout the month. With new additions to the installation, including a 4-dimensional soundscape made of the typewritten orchestra you’ve already seen portrayed in analog, the gallery will come to life with all new modes of poetic vision. A Poem Is Where The Heart Is. We hope to see you there!
RSVP and more info: https://www.facebook.com/events/232446820639627/
Some of the things that have been seen over the month of April
at A Poem Is Where The Heart Is:

END_OF_DOCUMENT_TOKEN_TO_BE_REPLACED

This year I’ll be performing with Anthony Evan Carson at Currents New Media Festival 2018 in Santa Fe, NM for Opening Weekend, June 7th-June 10th. We’ll be offering Dreams By Request, as well as creating a living, breathing dream exhibition on the streets of Santa Fe’s Railyard Plaza. Expect to see a unicorn or two added to the general menagerie of poetry and drawings on demand.

Very excited to be a part of this exiting international festival celebrating new media!

This has to be the most celebrated experience I’ve had thus far with Ma Ja Ka. He has gone from a sad unicorn born into this reality to a truly jubilant dream body dancing to his own inner rhythm. To have these kids dancing with me was so incredibly fun. They kept saying things like, “Yo, is he real?” and “Yo! There’s a man inside that mask!!”. I took the one kid’s attempts to whack my nose as really having a hard time believing there was a real unicorn dancing in front of him. Unicorns, man. Far out stuff.

This girl asked me to write a poem, “without using words”.

I paused to look at my surroundings, recognizing that I was being put up to some Yoko Ono-like antics, a pretty high bar set in a field a bit outside of my normal practice.

My eventual poem involved a blank sheet of lined paper, and a lit smudge stick of sage. I made sure to hold the sheet of paper over the smoke catching all of its essence and I imagined the lines on the paper melting off as this page was erased of all its vibe. I handed the page to the girl and she put it to her nose telling me it smelled grand.

That was not enough though.

I told her sage is usually used in ritual to cleanse a space or object, blanking out its previous state of being leaving room for a new vibe to be added. In this case a blank page of paper was blanked out even further into nothingness and beyond.

Looking at the piece of paper I didn’t really know what that meant but holding it there in my hand it felt pretty deep. 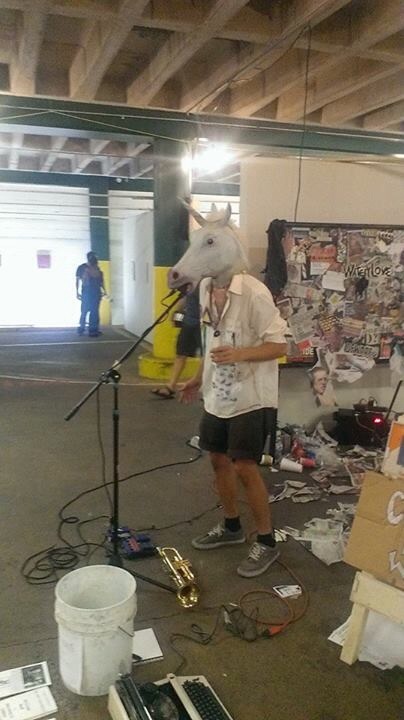 via reddit: “Baltimore Artscape summed up in a single image”

From the comments, “He put his trombone down and the prerecorded sounds kept playing. People are just looking at him unphased so he starts shrugging his shoulders, like “so now what?” And people continue to look at him for amusement.. It was so absurd, but it made me laugh. Hope you got a lot of money for his collage funds”

Over the weekend, I traveled down to Baltimore’s Artscape with Little Berlin gallery. I busked and wrote hundreds of poems on an old electric typewriter for passing spectators. My dream body Ma Ja Ka was there to. His performance left the audience transfixed, hypnotized by their dreams.

Baltimore Artscape summed up in one photo
The Life and Works of Marshall James Kavanaugh
Blog at WordPress.com.
Loading Comments...