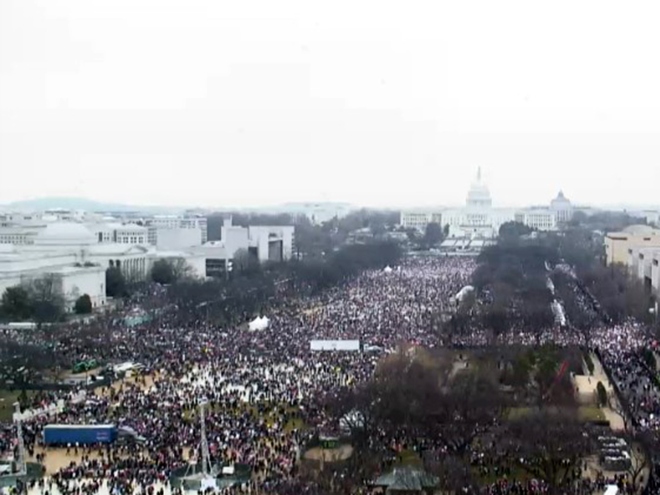 THE PUSSY GRABS BACK

(photo from Earthcam on the National Mall in Washington DC)
A million women and their allies marched on Washington today. Millions more marched in cities around the world in solidarity. Even the organizers were surprised and maybe even a bit overwhelmed by the turn out.

For those with any sort of connection to the feminine voice of our generation, we knew the numbers were going to be yuge. But being deep in it felt like finally this was the new world rising.

A world in touch with its feminine side. A world with respect for its mothers, sisters, partners, and comrades. A world humbled by beauty, centered in love.

To be there one felt an end to the patriarchy. This system of self-destruction that has tied us all up in mountains of despair. In its stead the voices of matriarchs from far and wide came to magnify our joys, our communal struggles, and our ability to heal.

The movement on the National Mall was full of smiles between strangers, signs spouting slogans empowering pussies, and almost every issue one can think of that we face in this modern era from Climate Change to Anti-Pipelines to Black Lives Matter to Health Care As A Human Right being laid out categorically as a part of the fight.

There was a crude alchemy in the way this next wave feminism gathered its voice. Always simple and to the point with hashtag lines and meme-based illustrations. Sometimes tripping up the older generation who joined our ranks and asked questions like “What’s a Queef?” or “What is that green drawing that they’re calling Dope Kush?”

It went deeper too though. This surface jest gave way to the greatest demonstration of sisterhood that I think any of us have ever experienced. Even with a sister, as a cis male, my own personal experience of this type of sisterhood has only ever been looking in from the outside.

To be in the middle of it all, though, was absolutely humbling.

I saw women complimenting each other on their beauty. I watched as they assisted each other to have a better view or to get where they were going. The crowd made way for disabled marchers in wheelchairs and with walkers. Even with a million people amassed together in a small space, there was hardly anyone pushing up on anyone else. The few times I was bumped into, I was surprised to hear an apology.

These are still surface details.

What I’m talking about is a million non-male identified people and their allies stood on the street together and created a space that felt so safe, even the voices that might typically keep to themselves were made loud and clear.

These are the mothers who have let the world of men throw their temper tantrums and still at the end of the day they offer warmth. The partners who have suffered abuse and emotional vampirism, and yet still find a way to forgive. Those that identify as queer or identify as trans or identify as uniquely themselves and are patient as the rest of us stumble over the simple request of stepping outside of the binary in our pronoun usage. Friends disenfranchised and attacked because of the color of their skin, being vocal on how we can stand beside them in their fight for their lives.

Sisters who give way too many hints that they’re not interested in the dudes hitting on them at bars, or catcalling them in the street, or in their homes, or work space, or wherever men are around, and yet still include men as victims of the patriarchy. Survivors of rape and sexual assault who rediscover their power and share it with the world. Drag queens and earthen goddesses. Nasty women and Black Bloc anarchists.

This safe space was their vehicle.

And as a fellow activist, it was exhilarating to see so many of these warriors standing up, some for the first time in a public forum. But we all know, they have been standing up for us for our entire lives.

Since the moment we were born, our mothers have nurtured us. Doing this while secretly hoping the next generation would understand the love of its mother and not fall into the false egotism of its father. If for whatever reason not our biological mother, this mother planet which we stand on. To be more compassionate and caring. To take on the weight of the world and fight until it is brighter.

This is why I march. My mother. My sister. My planet. My earthly sisters. We together will overthrow this toxic masculinity. We will rally together around justice and peace. It will be the end of the patriarchy. A better world lies in the female heart of tomorrow. I see it on the horizon. It wears pink lipstick and shouts “The Pussy Grabs Back!”

The Pussy Grabs Back 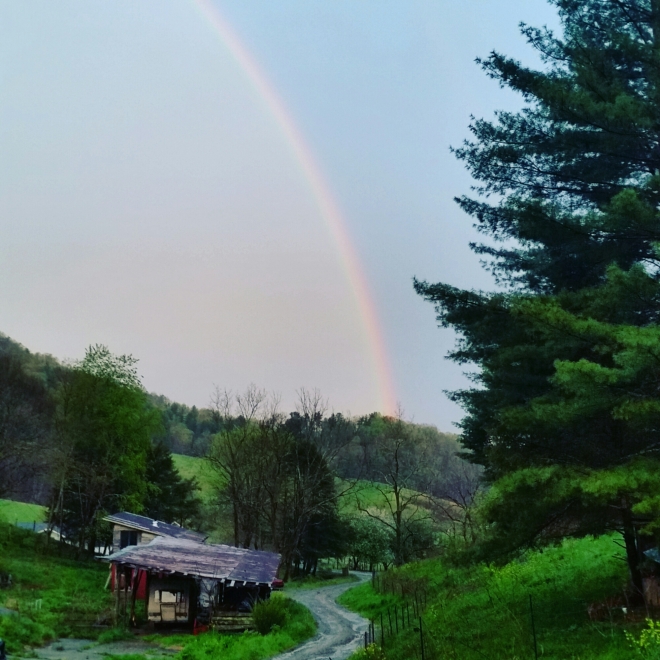 I’ve driven through almost ten states in the last two months, all on the east coast, and the only bumper sticker I’ve seen on the backs of cars is a “Vote for Bernie” sticker. This is with driving both through cities and rural areas and everywhere in between.

I swear, I haven’t seen a single HRC sticker or Donald Drumpf sticker in all that time. I know their supporters exist amongst the same geographic areas, but as far as I can tell they’re not as excited.

I mean, even with the road signs in front of people’s yards, the only non-Bernie one I’ve seen was in DC and it was for HRC. At almost every venue I’ve played along these two tours, the exterior of the house had a Bernie Sanders sign or a sticker. I even stayed at a farm in Flemington, NJ where the residents had painted a huge Bernie Sanders sign outside along their gravel farm road. I can’t think of any other candidate who has murals painted by street artists in so many cities, at least not one’s where they happened completely independently from the direct prompting of any campaign official but instead happened solely because of inspired citizens.

I mean, I have to admit the fervor has made me feel safer in my travels. It’s like being surrounded by the warm hearts of family. Just yesterday a woman at a gas station said, “Nice Bernie Sanders sticker!” to me (I’m a part of this vote for peace as well) from across the lot.

I laughed at first, hoping to dodge a political debate, hearing her voice and reacting to the compliment as if it were sarcastic. But then I looked up and saw she was entirely sincere. So I smiled and said, “Thank you. Let’s hope he gets in there.” We waved and then both drove off in our seperate journeys. Then I went to Bernsville, NC (a local joke, actually spelled Burnsville) and saw what felt like the epicenter of what could be possible for us all, if he really were elected. A communal effort full of art and creativity living off the land and worshipping the moon and the stars.

I don’t understand what’s so foul about those ideas to others. For instance, I found a comic zine in the bathroom at a McDonalds in Blacksburg, VA that basically said something like “Beware of all hippies and punks. They collect crystals and don’t beleve in God but worship a goddess named Gaia instead”.

My response to that was, “So fuckin’ what?”

I mean, where the heck does that part of the human condition come from? What in our DNA causes us to judge others and decide what’s the best for them? Why can’t people just let go and let others do what they want? Why can’t they just mellow out some? It’s like the people that created that zine are absolutely insane with hate. They’re deluded by it.

On the other side of the spectrum, the Bernie Sanders fervor is something really interesting. It’s surprising to me the mainstream’s response thus far has been mostly radio silence and scathing reviews of disbelief. It’s surprising they haven’t just co-opted the whole thing yet. Or that seemingly they haven’t been able to.

And now everyone’s saying they’re doing their best in blocking our abilities to vote. The optimist in me doesn’t see this as purposeful manipulation. Instead it registers it as an example of how our civilization or at least our country is truly crumbling into ineffective bureaucracy. Like, wow! We’ve gotten this far and our voting system is still 13 steps in the opposite direction of where it should be. The cynic in me says there’s purpose in this complete incompetence.

But yet, Bernie Sanders is still winning hearts and minds. And I’ve seen him speak. He also sounds sincere. Like so sincere, he’s showing how exhausted he is that he’s 74 and he’s seen how this whole country works (or rather doesn’t) and he’s flabberghasted that he has to work through that entirely broken system to attempt a win in order to fix it.

Obama had fervor. But not this early. And not ever this much. Has any candidate that anyone can remember ever touched this many hearts?

I mean, hot damn. It’s a wonder to watch so much of the world so engaged and enthralled by the intention of Love. Have we made it across the threshold into a new era of heart-centered individuals just in the nick of time? Just before we destroy ourselves and everything around us?

Or is this just another way that the natural cycle of the way things are, continues to laugh at us, all on its own volition?

A FIERY JOURNEY THROUGH BERNSVILLE